So I just finished Cynthia Bourgeault’s book, The Holy Trinity and the Law of Three. I cannot recommend it highly enough. Bourgealt’s teaching is one of those profound truths that, when encountered, pulls the student simultaneously backwards in lament for not having seen it before and forward into the endless possibilities of the truth lived out in the world. It’s the spiritual face-palm rendered simultaneously to grabbing a coat and heading for the door. I think it was Jesus who said something about metanoia…

Bourgeault opens her book by recalling a story told to her by Murat Yagan. The whole of the book is summed up in it, so I share the story in it’s entirety here.

In the years immediately following World War II, Murat recounts, he spent a time ranching in a remote corner of eastern Turkey. There he became friends with an elderly couple with whom he frequently shared a meal. Life had been good to them, but their one sadness was that they missed their only son, who had left some years before to seek work in Istanbul. He had indeed become a successful business man, but they had infrequent contact with him and missed him greatly.

One day when Murat appeared on their doorstep for tea, the old couple were bursting with pride, eager to show him the new tea cupboard that their son had just shipped them from Istanbul. It was indeed a handsome piece of furniture, and the woman had already proudly arranged her best tea set up on its upper shelf. Murat was polite but curious. Why would their son go to such expense to send them a tea cupboard? Why, for a piece of furniture whose ostensible purpose was storage, was there such a noticeable absence of drawers and cabinets? “Are you sure it’s a tea cupboard?” Murat asked them. They were sure.

But the question continued to nag at Murat. Finally, just as he was taking his leave, he said, “Do you mind if I have a closer look at this tea cupboard?” With their permission, he turned the backside around and unscrewed a couple of packing boards. A set of cabinet doors swung open to reveal inside a fully operative ham radio set.

That “tea cupboard” of course, was intended to connect them to their son. But unaware of its real contents, they were simply using it to display their china.

Convinced that our current understanding of our Holy Trinity is making a tea cupboard out of a ham radio set, Bourgeault sets out to rescue our understanding of the Trinity from centuries of being misunderstood. She uses Gurdjieff’s Law of Three also known in the Gurdjieff Work as the “law of world creation,” to guide her search for the true purpose of the Trinity.

Bourgeault makes some lofty claims about this Law of Three, calling it “Christianity’s hidden driveshaft.” After sitting with her work in study and meditation this week, I cannot disagree with her.

Here are the first two foundational principles of the Law of Three as she has them listed:

The interweaving of the three produces a fourth in a new dimension. 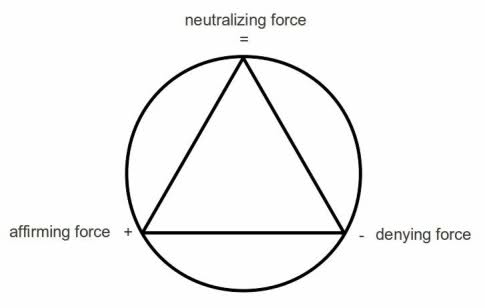 The simplest example Bourgeault gives to help us understand this cosmic law is that of braided hair. The three strands are equal and independent, yet give rise to a new phenomenon when interacting with each other. Another example is that of a sailboat. “The opposition of wind and keel will not push a sailboat forward through the water; it takes the ‘reconciling’ presence of the helmsperson to create the new phenomenon: the course made good over the water.”

Bourgeault takes the Law of Three and, beginning with primordial being, tracks the series of new arisings through creation, the Christ event, our familiar Holy Trinity and eventually oikonomia: God’s purposes fulfilled at the end of time. I encourage you to pick up the book and see the work for yourself. It is amazing.

If you’re anything like me you’re sitting there wondering, “What the what?!” Even as I was starting to “get it” I did not understand the full implications of what was unfolding. I likely still do not, though the more I sit with this concept the more it resonates with what I am seeing in myself and in creation.

I invite you all to consider that opening story again. Since the woman loved her son and loved tea, she assumed her son would give her a tea cupboard. She was not open to a new arising in their relationship: she only received what she already valued. Jesus’ warning that “they have received their reward,” rings ever true in this space. Her son’s gift had the potential to change the nature of their relationship by allowing them to talk over long distances. I hope that I becoming more able to move outside of myself; not seeing everything as for or against me, but seeing everything in the realm of new possibility, as Jesus saw it.

The Law of Three gives us a tool for visualizing that third force which leads to new creations. It can help us out of those dualistic logjams (politics, theology, personal disputes), enabling us to see new ways forward for our lives, churches, communities, and all of creation. I hope to share more as I sit with these thoughts, and I would love to hear what you all think of this very surface-level rendering of the Law of Three.

One thought on “The Blueprint For Everything”